Membership at Stark Federal Credit Union is open to anyone who lives, works, worships or attends school in Ohio's Stark or Carroll Counties.

In 1960, teachers and administrators at Plain Local Schools wanted an alternative to big, for-profit banks. They got together and opened our credit union on January 16, 1961. There was no online banking, debit cards or even checking accounts. Instead, they operated out of a shoe box. It was a place for some people to save money and others to borrow money.

Stark Federal continued to grow and expand over the years. In 1965, Stark Federal Credit Union changed its charter to include all local school districts in Stark County. The office was moved to the Stark County Boa 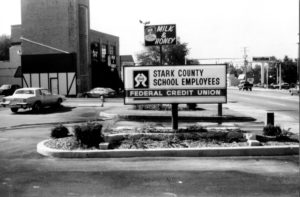 rd of Education administration building, then located at Molly Stark Hospital. In 1978, the charter was expanded to include Carroll County School employees. Stark Federal’s charter was changed again in 2003 to include anyone who lives, works, worships or attends school in Stark or Carroll Counties. Today, Stark Federal Credit Union serves the financial needs of over 14,000 members.

Stark Federal generally offer better rates on loans and savings than do commercial banks, due to credit unions' unique operation. While banks must make profits for their shareholders, credit unions exist only to serve their members. More than 2.7 million Ohioans (about 20 percent of the state's population) belong to credit unions.

We are proud sponsors and supporters of several charities including:

Voted "Best Credit Union" in The Canton Repository's
Best of the Best Contest 9 Years in a row!

To be the best full-service financial institution dedicated to the interests of our members by providing convenient, responsive and economical services and products while expanding our membership and maintaining a strong financial position.